The final push is on…. 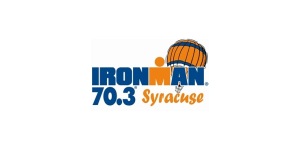 It struck me earlier in the week that my race is in 4 weeks. Panic set in quickly and I needed to be sedated (only kidding but it would have helped). We got emails from Ironman this week indicating that the final schedule is up, as well as the bib numbers and swim waves. In my age group they split us up as there are more participants in the 45-49 age group than any other. In fact, there are over 220 of us old guys alone! Brittany’s swim wave is about 25 minutes before mine so my chances of seeing her at all during the race are slim to none.

My training went well this week. The weather cooperated for the most part so most of it was outdoors. This weekend I had a couple of longer sessions. On Saturday I biked 90kms at race pace. This took me about 3 hours in total. A normal person would have taken Sunday off to enjoy what was left of the weekend, but we all know I am far from normal. My training plan had me doing a run-bike-run workout. I have done this one before and I find it really tough. It began with a 10k run, followed by a 30k bike, and then followed by another 10k run. Let me tell ya, the second 10k run was not pretty. It was certainly good training for mental strength and perseverance. 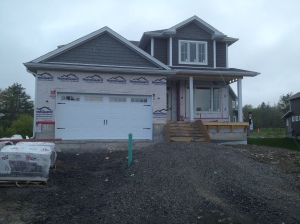 The new house is really coming along. It is tough to take pictures of the progress now as everything is happening on the inside and the door is now locked. We get to peek inside the windows to catch glimpses of various things. All the drywalling and sanding is completed. As well, the oak staircase and cast iron spindles are now in place. They seem to be building the island in the kitchen as well. From an exterior perspective only the stone is left to be put on. It has been in the driveway for a couple weeks but I guess it hasn’t made it to the top of the schedule yet. They did put the garage door on this past week as you can see in the picture.

I travelled 245kms during my training this week, most of it basking in the sun!

See you at the finish line…..