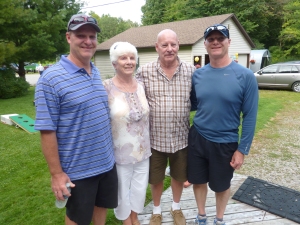 Well the highlight of the week was certainly the surprise party we had for my parents as it was their 50th Wedding Anniversary. We were lucky enough to have Bob and Pat host the party at heir house which is on Charleston lake just north of Brockville. We had been planning for months and trying to keep everything a secret and I think for the most part they were surprised. Overall we had about 40 family and friends attend, sone came from as far away as Winnipeg! We also had plenty of family support from for the Toronto area as well. All of guests had arrived about an hour prior to Mom and Dad getting there and had hidden in the garage. They jumped out and yelled surprise shortly after Mom and Dad arrived. Dad was really emotional, it was not expected. He was overcome by tears and needed a moment to compose himself. I think seeing Wayne and Lynn who had travelled so far put him over the edge. We had an awesome time playing games that were setup by Bob and Pat, kind of a little mini triathlon. There were bean bag tosses, lawn bowling etc. We kept track of our scores as we worked our way through the events with our random partners. The eventual winners were Mark and Dad, clearly some cheating was going on!!! We finished off with a BBQ and cake of course. It wasn’t long before Dad was playing cards with some friends and trying to take their money, some things never change. I love the picture of the family above! 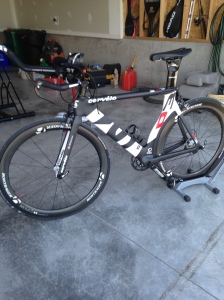 My training this week went well. I bought some new race tires for my upcoming race so I was excited to get them on the bike and give them a try. On Saturday morning I did a long ride and I was very pleased with the wheels. Even if I am not any faster, I look faster and that is the main thing! I travelled 185 ams during my training this past week.