Competitive Race Season is Over

I have decided that I am finished racing for this season. I had thoughts of doing one or two more triathlons but I just don’t have it in me. I had a reasonably positive race season, beating my best times in a couple of tri races. I also posted my best 1/2 Marathon time in Washington back in March. My training has dropped off in the last month. Part of it is lack of motivation and the other part is projects coming due at work. Add it all up and there just isn’t enough time to be ready for a late season 1/2 Ironman.

Jackie and Brittany are in Ireland. They departed late on Friday night and seem to be having a good time. I get the occasional text and pictures. They have been on the Guinness tour and also a visit to Trinity College. They still have plenty of time remaining to scout out some of the other neat spots on the emerald island.

I travelled 121 kms this week during my training. That included a 11km kayak on Saturday in Seely’s Bay. It was a good spot to kayak so I am sure I will return at some point with Jackie when she returns from vacation.

See you at the finish line…… 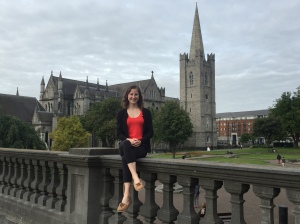