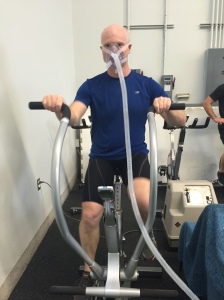 Over the past couple of weeks I participated in a study that Brittany was leading. In involved doing three sessions on a full body trainer. The first session was to determine my Vo2 max. It was just plain hard. You used the trainer until you couldn’t any longer, all the while they increased the tension. They put my results in a spreadsheet and it popped out a number for me. I compared that to others in my age group, and I was above average.

The second and third sessions were meant to be a mystery. One of them I would be breathing in normally oxygenated air, and the other I would be oxygen deprived, like I was at elevation. I was not told which order they would be administered. The second session took my quite some time to just get used to working out with a big mask attached to my head. It was hard to control my breathing, exhaling was difficult. I chalked it up to the fact that I never have to wear a mask when I workout. The third and final workout, also with the mask, was much easier. Riddle solved, the second session was in the oxygen depleted state. I have no idea what was the actual goal for the study. It is meant to be blind, and I am blind.

I injured my thigh late last weekend. It nagged me all week and I had to cutback my workouts as a result. I wanted to finish the study so I worked to rest in-between those sessions. Yesterday was to be a long run day but there was no way that would be possible. Even biking is difficult at this point. It is putting my 1/2 marathon in jeopardy. 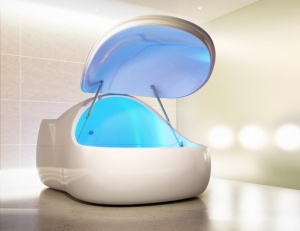 Yesterday I took a trip to Toronto to bring up some easter gifts for Brandon and Kayla. We met a local breakfast spot and had some good conversation. They only had a few weeks of school left before exams. For Brittany, it is the last few weeks of her undergrad degree! While I was in Toronto I tried out a floatation therapy. What is that you may ask? Well, you get in a pod filled with 10 inches of heavily salted water and float. It feels like you are totally weightless. All the lights are off and you just float. It is the strangest feeling, almost like you are floating in the sky, but not falling. I would highly recommend it! It is good for both the body and the mind, very peaceful.

This past week I travelled 97 kms while training.

← Stretching It Out & Whole 30
One Undergrad completed, One to go! →