What happened to the hot weather we had yesterday? Jackie and I were up at the crack of stupid once again to head to the race location. Being the organized person that I am, we were there very early. It helps to get a good spot to rack your bike in the transition zone, and I managed to get a great one! As we waited for the start of the race it rained. It was mostly showers, two or three of them moved through the area. It was the temperature that was surprising. It was downright cold. As I stood at the side of the lake awaiting the start of the race I was literally shaking. Of course, I was dressed for a hot day, wearing thin quick drying lycra. 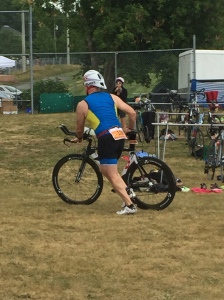 The time to race arrived and I jumped in the water. It actually felt warm compared to the air temperature. I haven’t had that experience before for a race related swim. Jackie stood on the shore continuing to freeze. As I entered the water I met an old co-worker who recently took up triathlon. I like to think I may have had something to do with that, lol. I had one goal this race, to make sure he didn’t beat me. He is about 10 years younger than I am so I had my work cut out for me. The swim was uneventful. I didn’t get kicked too many times, and I managed to stay on course for the most part.

As I went through transition and ran my bike to the mount line my co-worker was right beside me. We had swam the exact some time, although I didn’t recognize him as we were in the water. We climbed the hills out of Sydenham side by side, and then I finally pulled away. I wasn’t sure how much of a gap I had opened up on him until I hit the turnaround point. I was pleased that I had a cushion built up. It rained a few times during the bike so I had to be careful not to wipe out on the skinny race tires.

The run was a tough one. I went hard on the bike and it hurt my run time. My legs were shot. I kept up a respectable pace and found a way to get to the finish line. I beat my time from last year at this event by a minute and a half. Woo hoo. And, let’s not forget I beat the young coworker by over 4 minutes. Goal accomplished.

I planned out my race schedule for next summer. Big news! More on that in next week’s blog.

My training volume was down last week as I took a few rest days in preparation for the race today. I travelled 100kms this past week.

← It’s getting hot out there!
Next Year I Reach The Goal! →